A teaser is a combination of two or more bets in which bettors can adjust the point spreads and/or totals in their favor at the expense of a reduced payout. The point spread may be decreased for the favored team or increased for the underdog, while totals may be adjusted by decreasing the over or increasing the under. Teasers are similar to parlays in that all the individual bets must be won to win the bet.

If you believe both the Broncos and Seahawks will cover their spreads, but would like more of a cushion, a teaser could be used instead of the traditional parlay. By placing a 6-point teaser, the spreads would be changed to Broncos (+4) and Seahawks (-1) [-2 + 6 and -7 + 6, respectively]. In this particular example, the Broncos would not even have to win, and could lose by as much as a field goal. If the Seahawks then won by more than a single point, you would win your teaser.

You also have the option of teaser betting on the total (over/under). Using the same two games from above, let's assume you want to take the over in the Broncos game and the under in the Seahawks game. The line will always move in your favor with a teaser bet, so placing a 6-point teaser on the lines above, the over bet on the Broncos game changes from 53 to 47 [53 - 6] and the under bet on the Seahawks game changes from 44 to 50 [44 + 6]. This means that the Broncos and Patriots would have to score more than 47 combined points (instead of 53) and the Seahawks and 49ers would have to score less than 50 combined points (instead of 44) in order for you to win your teaser bet.

You could also place a teaser that includes both the point spread and the total. This provides more breathing room, but comes with a significantly reduced payout. The degree of the tradeoff varies from one sportsbook to another. 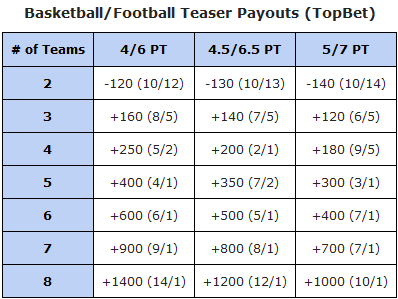 While these are normal payouts, sports betting sites typically determine the number of games or teams available on a teaser ticket and use the payouts listed on that ticket. The payouts on the ticket may vary from the chart above.

The risk vs. reward relationship is a concept that applies to all facets of gambling. Answering the question of whether or not to improve your odds of winning depends on the payout you stand to gain or lose. For example, if you could cut your risk by 10%, but the payout was cut in half, you would be better off sticking with the original bet. This is how we approach teaser bets: does the reduced risk exceed the reduced reward?

Placing a parlay wager that includes both the point spread and total from the example above might payout 2.6/1, while a 6-point teaser might payout 10/12. This means you would win $8.33 on a $10 teaser instead of $26 on a parlay. While your spreads are improved, you can see that your potential winnings are drastically reduced.

Determining whether or not teasers are worthwhile is difficult because these bets are incredibly circumstantial. Sports betting itself is extremely dynamic. It can be influenced in an instant by a nearly infinite number of factors, and assessing the strategy of using teasers is situation-specific. Most bettors will reserve teaser betting for conditions that are tailor-made for it. For instance, if the bettor wants to place a parlay but is uneasy about the point spread or totals being offered by the sportsbook, a teaser bet may be a worthwhile option. In general, however, teasers do not work in your favor.