Previously, we described basic sports betting for beginners. Straight bets (aka point spreads) and moneyline bets fell into this category. We are now going to move on to intermediate and advanced sports bets. These bets aren't necessarily difficult to place, they are just not usually where someone would start when making their first ever sports bets. The following bets take a little more knowledge, research, patience and maybe even luck to win.

Totals or over/under bets are a bet on what the final combined point total of both teams will be. This would be shown as either a whole number, like 45, or a number with a half point so there are no ties, like 45 1/2. Pre-game factors like weather and injuries can really affect the over/under line. In-game things like injuries that happen during play and the actual score of the game can affect whether that over/under is ever reached. One team winning by a large margin for example, could cause one of the teams to start removing starting players or cause the team leading to sit on their lead without really trying to score too much.

To place an over/under bet, you would just decide if you think the final score will be over or under whatever the point total is listed at. At the end of the game, it's pretty simple to determine who wins, as the points of the two teams are just combined. Over/under bets are normally a 11-10 or 110-100 wager, meaning you place the larger amount to win the smaller amount.

Parlays are a fun but difficult wager to win. Parlays are multiple bets made at one time combined into one large bet. To win a parlay you have to win every bet you made within it. And, the more bets you made within the parlay, the more money you will win if they all are correct. But just one loss within the parlay makes the entire bet a loser. The table below shows what would be common payouts for parlay bets: 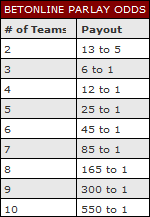 The "number of teams" column is the total number of games or bets you play. The term "teams" can apply to actual teams being picked, over/under or other bets. It is very difficult to win parlays of 4 or more, which is why the payouts start to get very good.

Teasers are another interesting but more advanced bet that can be placed on point spread games and over/under. A teaser allows you to adjust the listed spread or over/under for a reduced payout. The below chart shows the payouts based on how many points you might adjust an NFL football game. 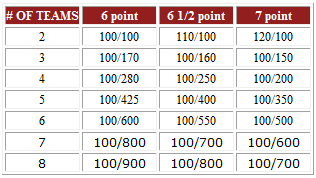 So, if you wanted to play a 3 team teaser, adjusting the line on 3 NFL games for your choice of team in each game by 7 points, you would place a $100 bet to win $150. A game that was, for example, the Green Bay Packers -13, could be adjusted to Green Bay -6 as one of the parts of the parlay.

If bets are a series of bets that only continue if you win the previous game. Bets can be placed on a series of between 2 and 15 games. An example of an if bet would be:

The odds on if bets do not change or get better the more teams you pick because at any time if a bet loses, the series of bets ends. You also do not have to bet the whole amount from a previous win. In the example above with the Seahawks and then the Rams, the bet could say if the Seahawks win, place $165 on the Rams to win $150, keeping some of the winnings in case the 2nd game loses.

These more advanced bets can be a really fun way to bet and watch some games. One of the most exciting (and stressful) things you may ever do is be watching the last game of a 7 team parlay, having one the first 6, and knowing that a huge payout rests on the shoulders of just this one game. Winning it nets you $8500 on a $100 bet, while a loss kills the whole bet.