Bookmakers are seen among most sports bettors as being the common enemy. Part of the appeal of betting on sports is not just the money that can be won, but the challenge of trying to beat the bookmakers. The sense of achievement from getting one over on them can be just as satisfying as making a profit.

Almost as enjoyable as beating the bookmakers yourself, is hearing about others who have done so. That's why stories of betting coups are so popular among sports bettors. Many gamblers dream of being involved in a successful betting coup, and some go as far as actually planning them. Only a select few ever pull them off to any great degree though.

In this new series of articles we are adding to GamblingSitesOnline, we are going to be writing about some of the greatest betting coups that have taken place throughout history. Hopefully you'll find them interesting, and they may even give you the inspiration to take the bookmakers to the cleaners yourself.

The first betting coup we are going to write about is one of the most famous. Known as the Yellow Sam betting coup, it was masterminded by the legendary professional gambler Barney Curley.

Who is Barney Curley?

Irishman Barney Curley has a colorful history. He studied for priesthood before falling sick with TB, and went on to work in a number of different industries. He tried owning a pub, which is believed to have lost him a fortune, and went into the entertainment business where he had some success managing a pop band.

It was in the early 1970s, though, that he really came into his own. This is when he decided to enter the world of gambling, with a particular focus on horse racing. Within just a few years he had pulled over a betting coup that is still talked about today, and he is known to have been behind other high profile coups. It is almost certain he has been involved in other coups that we don't even know about as well.

Yellow Sam was an unspectacular racehorse owned by Curley. It is not known whether Curley bought the horse with a betting coup in mind, but he soon started laying down the groundwork. He instructed the horse's trainer, Liam Brennan, to prepare Yellow Sam specifically for a National Hunt race at Bellewstown in Ireland.

The race was a fairly obscure one, with mostly amateur jockeys taking part. Curley was not after any prestige or glamor though; he was out to take the bookmakers for some serious money. Prior to the race at Bellewstown, he ran Yellow Sam in a number of races where the conditions were not favorable. This ensured that the handicappers and bookmakers would not believe the horse to have much chance when the Bellewstown race came round. 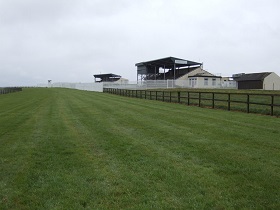 After weeks of putting the plan in place, including recruiting a number of people to help, Curley was ready to go. On the day of the Bellewstown race, the starting price for Yellow Sam was 20-1. Curley knew his horse had a great chance of winning the race, but he also knew that the price would start to drop quickly if he started placing large sums of money on it. This was precisely why he chose this specific racecourse.

There was just one public telephone box at Bellewstown, and this was essential to the coup. Some point before the race was about to start, an accomplice of Curley placed a call from this telephone. He pretended to be talking to a dying aunt in a hospital, meaning he received plenty of sympathy and was allowed to make a long call without being disturbed.

Meanwhile, dozens of other people were acting under Curley's instructions and placing bets on Yellow Sam at bookmaker's shops throughout Ireland. None of these off-course bookies were able to contact their on-course colleagues to inform them of all these bets due to the telephone being in use, which meant the price held up. When Yellow Sam went on to win the race, Curley made a healthy profit.

It's believed Curley made around £300,000 from the bookmakers on that day. Taking into account inflation, this would be worth well over a million pounds today. Nothing illegal had taken place, so the bookmakers were forced to pay out in full. Irish bookmakers actually changed their rules as a result of this coup though, requiring that all bets over £100 had to be placed at least half an hour before the start of the race.

The Yellow Sam coup led to Barney Curley becoming very well known in horse racing circles throughout Ireland and the United Kingdom. He invested some of his winnings into a stable of horses, which enabled him to have them trained for other specific gambles in subsequent years. We'll write about some more of his high profile coups in future articles.