Caribbean Stud Poker is often known simply as casino stud. It's a popular casino game in many parts of the world, and online, and shares several similarities with traditional five card stud poker. It is not played against other players though, but rather directly against the house.

This actually makes the game a lot simpler, as there is no bluffing involved and it is basically just a matter of whether the player or the house has the best five card poker hand. Its simplicity is one of the reasons why the game is so popular, along with the fact that it's possible to win large amounts relative to the stakes. The strategy involved is also easy to learn.

We explain the rules of the game below, and also provide information on the potential payouts and the optional side bet. We cover basic strategy as well.

The objective in Caribbean Stud Poker is quite simply for a player to have a better five card poker hand than the dealer. The player and the dealer both receive five cards each on every round, and the winner is the one who has the strongest hand. That is essentially all there is to it.

Standard poker hand rankings are used. If you are not familiar with these, please refer to the following table. 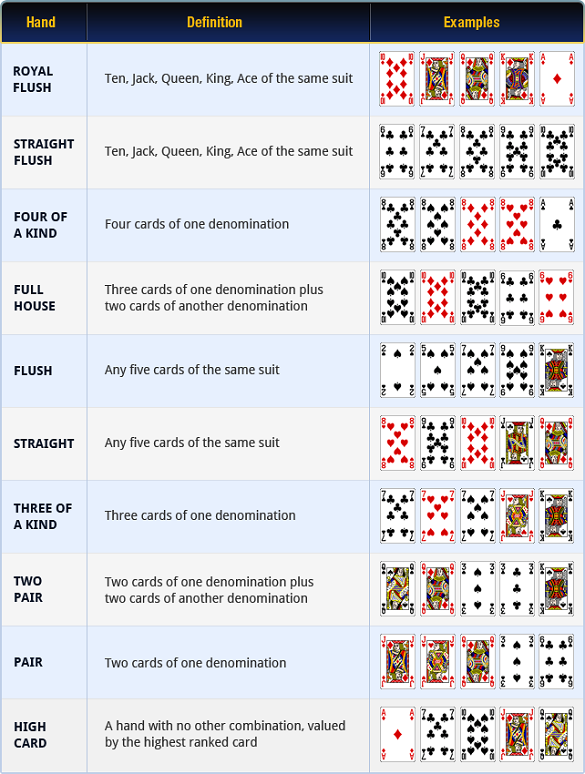 The basic rules for Caribbean Stud Poker are incredibly straightforward. At the start of each hand you place your initial stake, which is known as your ante bet. The dealer will then deal you five cards, all of them face up. He will also deal five to himself, with just one face up and the other four face down.

Once the cards are dealt you have to decide whether you want to fold your hand or raise. If you choose to fold, the hand is over and you forfeit your initial stake. If you choose to raise, you must make an additional bet. This bet has to be double your ante. For example, if you initially staked $5 on your ante bet, you would have to stake a further $10 to raise.

At this point the dealer will expose his face down cards, and his hand will be compared to yours. The following rules then apply.

The pay table may vary, depending on where you are playing. The following payouts are the most common.

Caribbean Stud Poker usually features an optional side bet. This generally costs just $1, and pays out based entirely on the strength of your hand. It is irrelevant whether the dealer qualifies or not, or whether the dealer has a stronger hand than you or not.

The pay table for this side bet will also vary depending on where you are playing. It is common for there to be a progressive jackpot attached to the bet, and for at least a flush to be required for a payout. A typical pay table for the Caribbean Stud side bet would look something like this.

You only have one real decision to make in Caribbean Stud Poker – whether to fold or raise after your hand is dealt. Game strategy is therefore simply about getting that decision right each time. Of course, the difficult part is in actually knowing which decision to make in any given situation. That's not quite so simple.

You can find some advice on the is subject on our Caribbean Stud Poker Strategy page.