The table games business is a hard one to crack. Traditional top performing games on a casino floor are not easy to replace. Blackjack, Roulette, Craps and Three Card Poker are staples in just about every casino they are permitted. Every year dozens of new table games are pitched to casinos as the next big game. For every one that makes it, like Ultimate Texas Hold'em or High Card Flush more recently, dozens get a trial and don't make it and one hundred more never see the light of day.

Below are two table games that you have probably never heard of. At the time of this writing, none of them are placed in a casino anywhere in the world. The odds are stacked against them. But, of all the newest games available for casinos to choose from, these are a few that may just beat the odds.

Invented by HMD Entertainment, LLC, Pokerlette is new take on some old games. As the name suggests, Pokerlette is a table game that combines poker and roulette. Instead of using a wheel and ball, Pokerlette uses a standard deck of cards, plus 2 Jokers. One of the most fun features of the game is that it's really four games in one. It's a roulette game. One of the betting options is similar to a slot machine. It's a 3 card poker game. And it's a 5 card poker game. 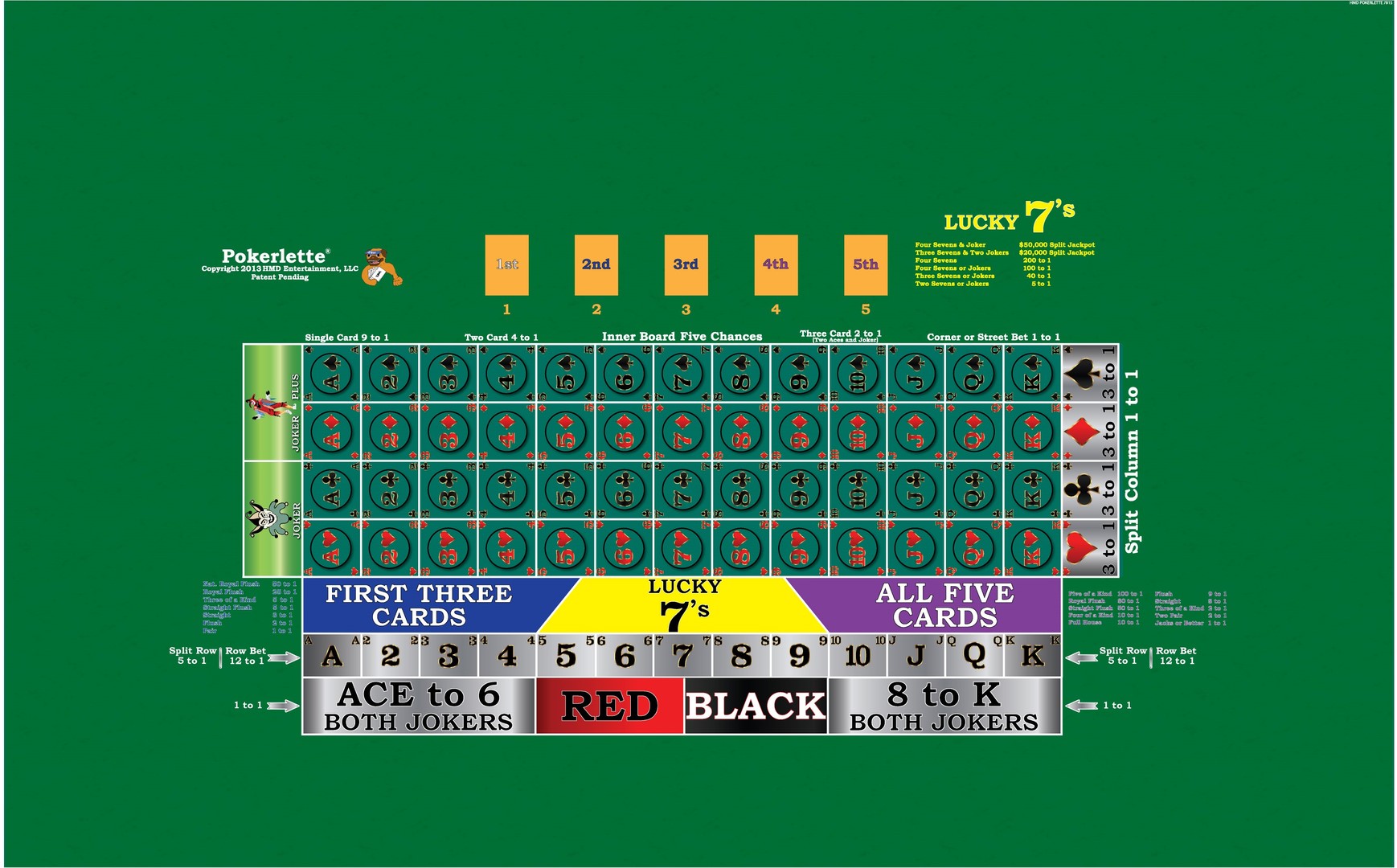 The game begins by players placing chips on any betting spots they choose. Players have a choice between any of the card suits and values from a standard deck of cards, plus the Joker and Super Joker cards on the left hand side of the layout, which all have green backgrounds. These bets give you five different chances to win. One for each of the five cards that will be drawn. Bets can also be placed on corners, allowing for four different cards to be chosen, columns, allowing all four suits of a card to be chosen, and lines separating two cards, allowing for both the cards on both sides of the line to be chosen.

Bets with silver a background are one card bets only, or to be more specific, the first card drawn only. Similar to roulette, this will be if the card is red or black, low or high, a specific card value or a specific suit.

The blue First Three Cards section is a 3 card poker game using the first 3 cards that are drawn. Jokers are wild in this part of the game, so it is pretty easy to end up with at least a pair, which is the minimum hand to win this wager.

The purple All Five Cards is a 5 card poker game using all 5 drawn cards. Again, Jokers are wild and the minimum hand to win here is a pair of Jacks or better.

And finally the yellow Lucky 7's is determined by how many 7's or Jokers come out in the 5 cards drawn.

If you have a Facebook account, the game can be played for free at their Pokerlette Facebook page. And hopefully we'll get a chance to play it in real life in the near future.

Money$uit 31 is the original game invented by Money$uit Industries, LLC. Money$uit 31 uses the classic card game 31, sometimes known by other names like Scat, Blitz or a few others, as it's base. Money$uit Industries, LLC now has three versions of this game. "31 Classic" will be described in this article because I believe the chances of seeing this version in a casino are greater than the other two, but all three versions can be played at their website.

31 Classic starts with player placing an Ante bet and an optional Natural 31 bonus bet. Players get four cards to start the game. Three cards in the main card box and 1 card in the draw box. Players will then look at their three cards only and must then decide if they think they can (or already did) get a high point total, of at least 17, in one of the suits. Aces count as 11 points, face cards count as 10 and all other cards count as their value. 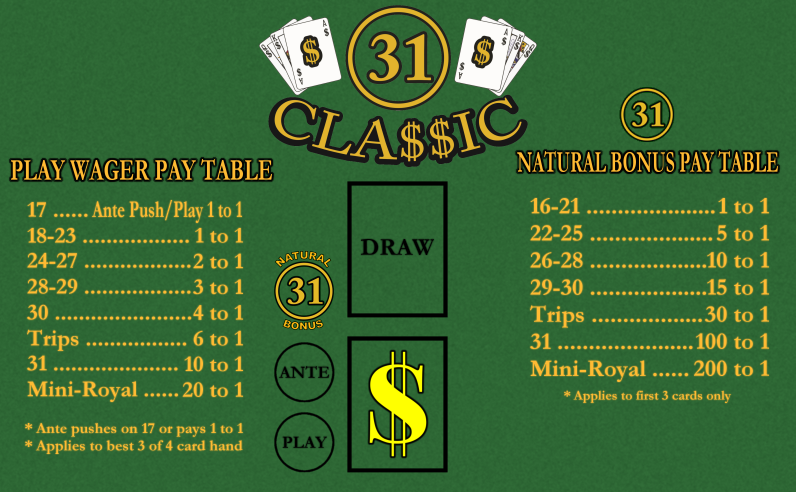 If the player already has, or thinks they can get, at least a 17 or higher, they place a Play bet equal to their Ante bet and then receive one additional card, hoping this card makes one of the suits in their hand a 17 or higher point total.

If the player does not believe the additional card they will get by playing the Play bet will help them get to a 17 or higher in a suit, they can fold, thus saving having to place the extra play wager.

All players that did not fold will now have their four cards reviewed by the dealer to see if any three can create a total of 17 or higher in one suit. The paytable on the left on the above layout shows the different win possibilities. Winning Ante bets always win even money and winning Play bets win the odds on the paytable.

Once the main hand is settled, the optional Natural 31 Bonus bet will be settled. This bet uses the paytable on the right and only uses the original three cards that were dealt to the player. The draw card is not used for this bet.

31 Classic allows for some fun and suspenseful play and interesting decisions when deciding if the player should play or not. A strong starting three cards of 10 of Spades, 5 of Spades, Ace of Hearts can be enhanced into a super hand with a high ranking Spade or Heart, or things can go right down the tubes if a Club or Diamond shows up. Let's hope we see this one in the Casinos soon.